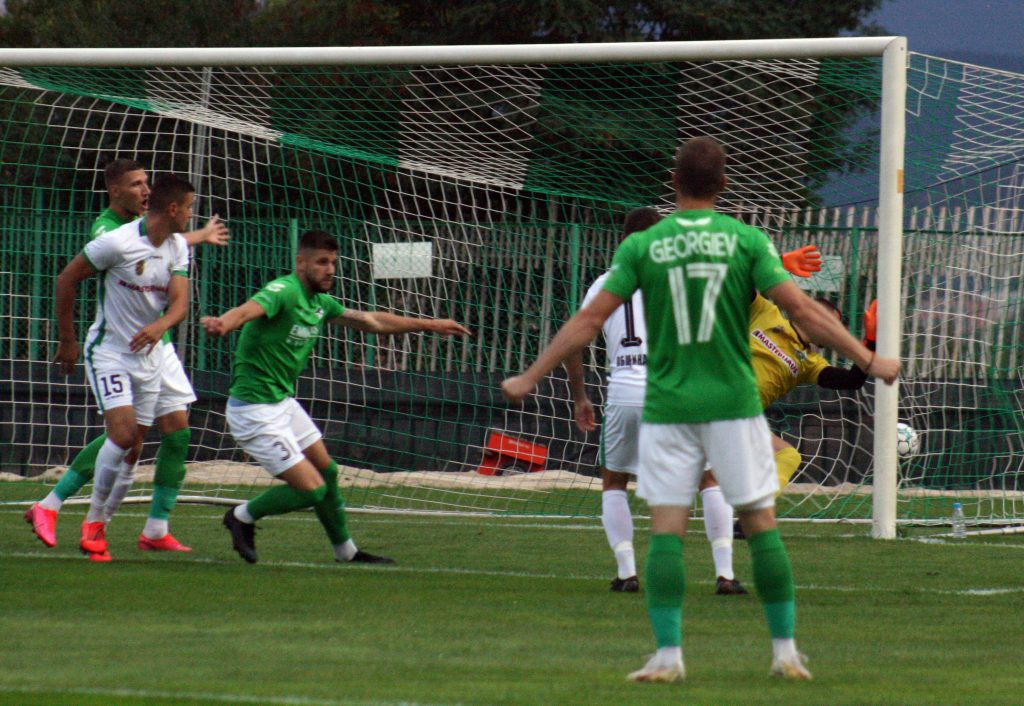 Pirin took fourth consecutive win at home since the beginning of the season, after a 4-0 success over Neftohimik (Burgas) in a match from the 8th round of the Second League.

This was the third consecutive victory for our team in the championship.

With their success on Friday night, our team confirmed the tendency to score four goals in each of the home games so far. All goals in this game was scored in the first half.

Krasimir Stanoev opened the score in the first minute with his third goal of the season.

Preslav Yordanov doubled our lead in 22-th minute. Four minutes later Valchan Chanov scored an own goal. In the 38-th minute Preslav has find the net with a diagonal shot from 10 meters. This was the 8-th goal for our player from the beginning of the season. Our center forward is leading the goal scorers table in Second League.

Warren Feeney: “We respect every opponent”

„We have to be confident – it is a home game but it comes also on a back of a little better form we got now. Аgain, we have no illusions – it is going to be very difficult. I have watched Neftohimik – they have no fear, they are playing with a good energy. But we are in form and we want to take a great result from this home game.

I think that all our rivals have an extra motivation playing against us. There is not something that we are worry about it. We have enough good players to face that motivation. No matter who we playing we are treating every game the same and we face every team with respect. Regarding the busy schedule – it is all about fitness.
There were 46 League games plus 8 to 16 cup games and use to manage to keep my fitness on high level so – games makes you fit. It is all about to make sure that you are recovering right for the next game. Everyone is ok and ready for the game expect of George Oakley who is still recovering from injury and the two Covid-19 cases“, Warren Feeney said. 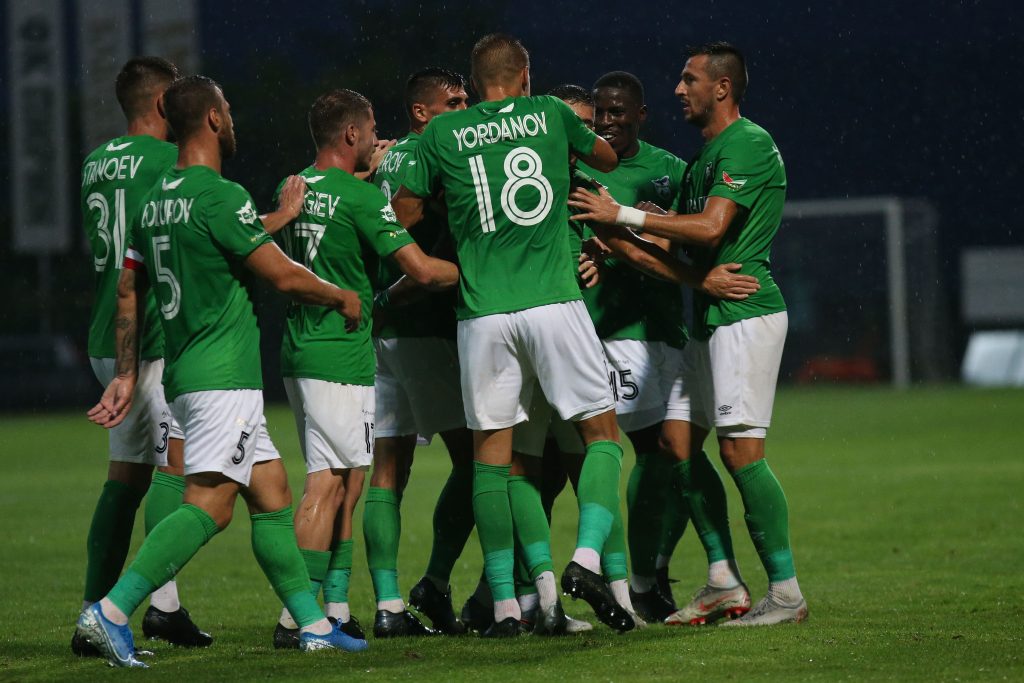 Tickets for the match with Neftohimik are on sale 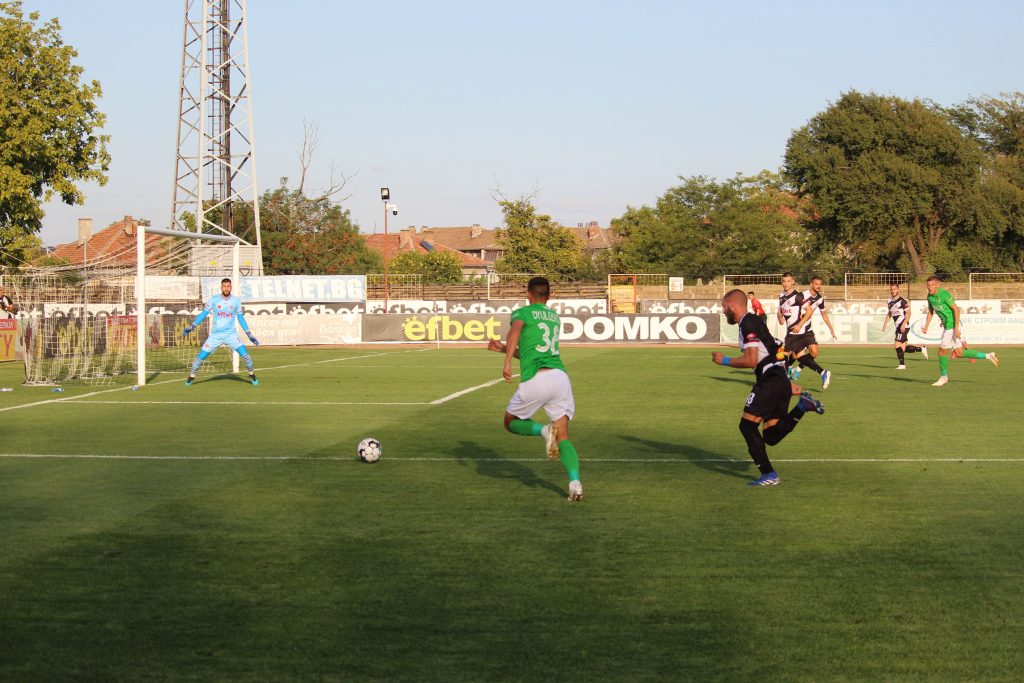 First away victory of the season

Among our goals, Vladislav Mirchev equalized for the hosts in the 57th minute. Our next opponents are Neftohimik (Burgas). The match is on Friday, 25-th of september at stadion “Hristo Botev”. 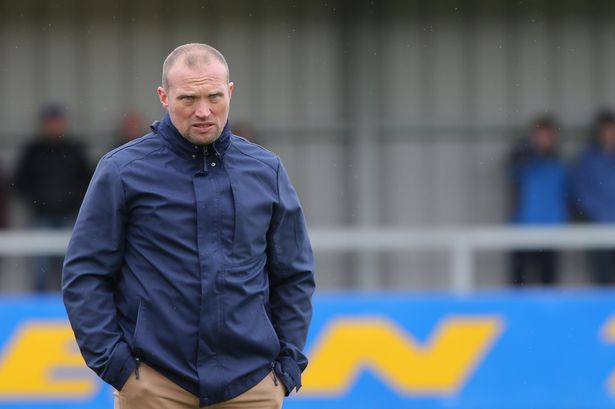 Warren Feeney: "We will look for a strong performance, but also ...

Pirin manager Warren Feeney shared his opinion for the upcoming visit of Lokomotiv (Gorna Oryahovitsa) to www.fcpirin.com.
„It is going to be very difficult game. I don`t think their league position justifies. Their players are good, we watched them a few times I have been very impressed. It is going to be a very difficult game for us. But we are going to be confident with it. George is still out because of an injury. The young Tasev is back. Everyone else is ready except George and the two Covid players. Everyone else one is fit and available. Spas Georgiev is returning from suspension, but I have to decide whether to play or not, because the people who stepped into the last game had a really good performance. We want the result. In the last six games looking the stats refer where we are, we are well ahead in everything but we want the result above all“, Warren Feeney said. 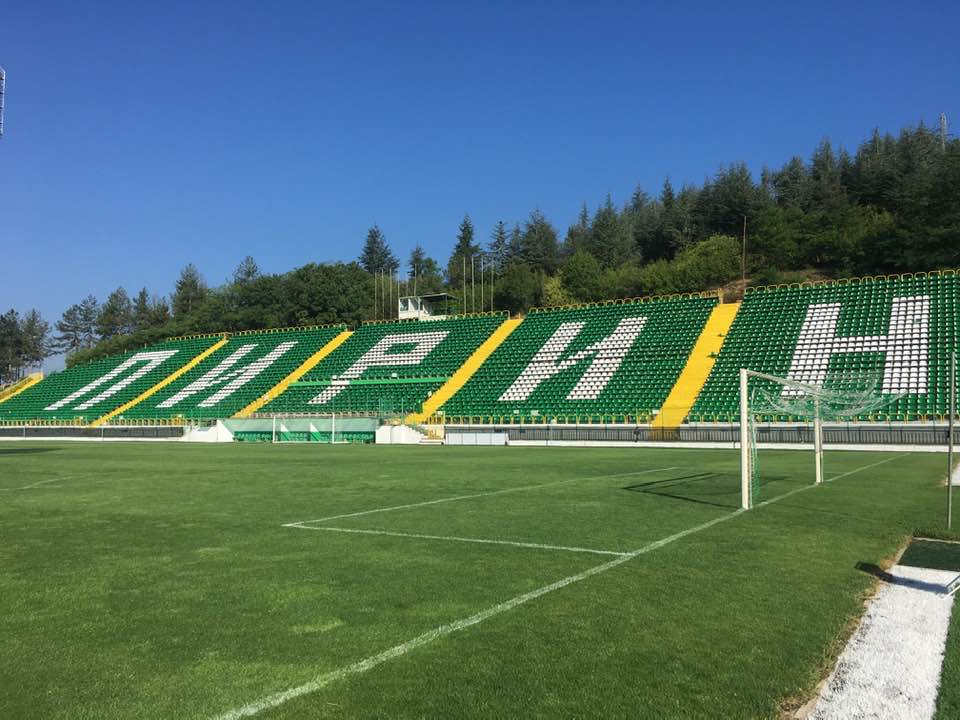 The two were separated from the group and quarantined in accordance with health requirements. All other test of players, coaches and employees, who are directly contact the activity of the first team are negative. The preparation for the game away to Lokomotiv (Gorna Oryahovitsa) continues normally. The match is on Monday, September 21, at 17:45 and will be broadcast live on Diema Sport 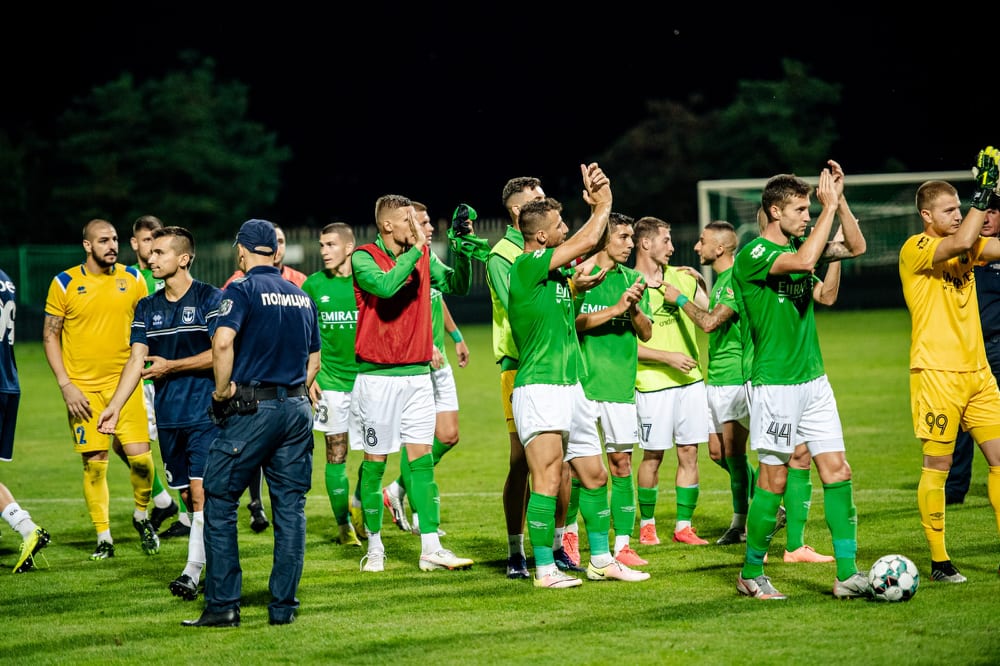 Against Rodopa in the Bulgarian Cup

The draw for the initial phase of Bulgarian Cup was made today. In the second preliminary round of the competition our team will visit Rodopa (Smolyan). The team from the Rhodope town is playing in the Southeastern Third League and currently ranks 16th in the standings. After 6 rounds from the beginning of the championship Rodopa has 1 victory and 5 defeats with a goal difference of 4:11.

The winner of the match will meet Beroe (Stara Zagora) 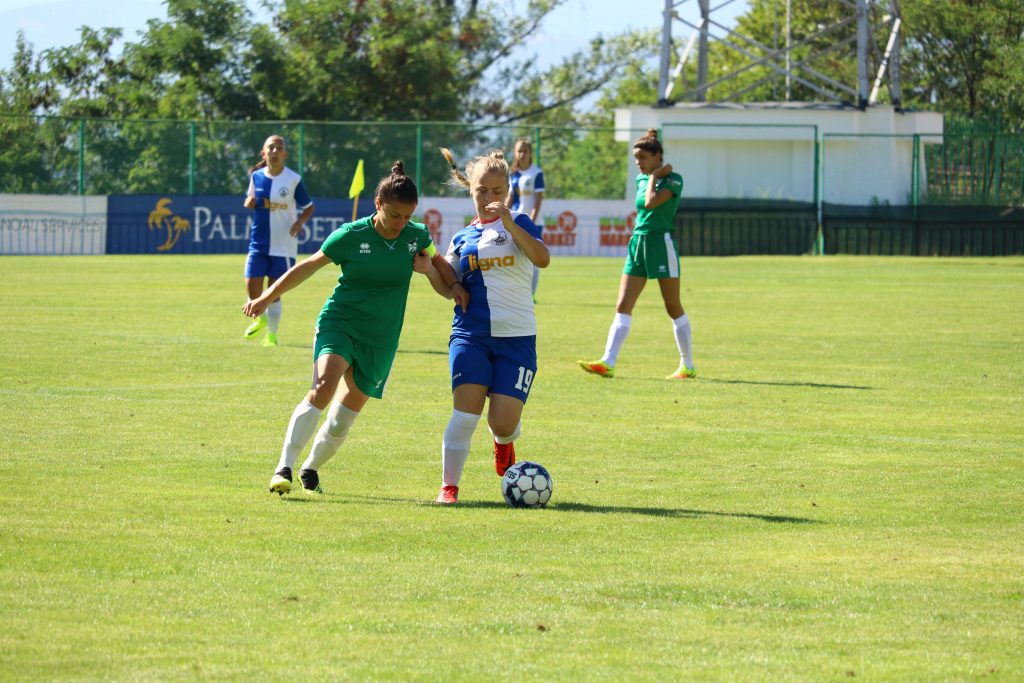 The only goal in the match was scored by Lilia Birova in the 78th minute of the match. The victory could have been far more convincing, but the Antonina Shopska, Veni Serbina, Polina Rusina and Lilia Birova have all missed good opportunities. Our next opponent is the newly promoted team of Barokko. The game is in Sofia on Saturday, 26.09. 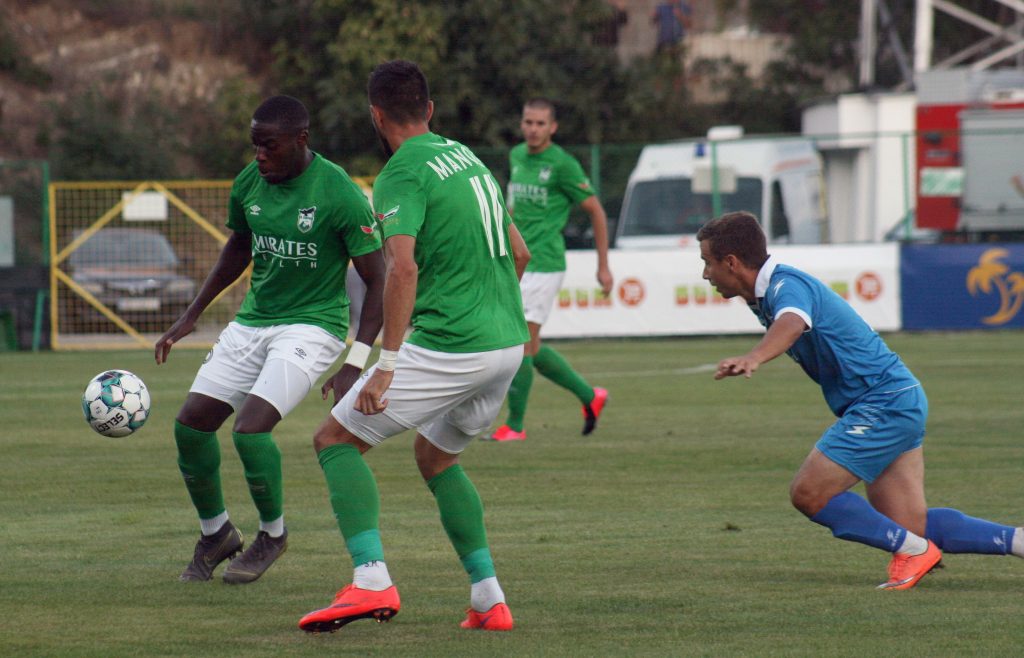 Pirin won his third victory since the beginning of the season, after beating 4: 0 Sportist (Svoge) in a match of the 6th round of the Second League.
The “eaglets” continued with 100 percent success at home since the beginning of the championship. For the first time since the start of the season the team has kept a cleen sheet. Young midfielder Petar Vutsov made his debut for our team, entering the game in the second half.
Preslav Yordanov scored twice in this match to led the scorers table in the Second League with 6 goals. Defender Stilian Nikolov made it 3:0 with his 2-nd goal of the season. An own goal of the captain of the guests Borislav Stoychev formed the final result of the stadium “Hristo Botev”.