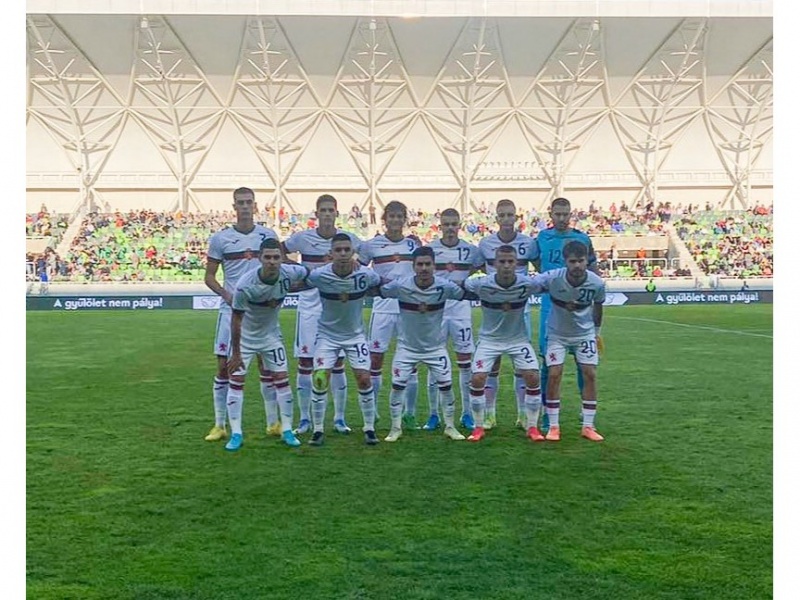 Tasev and Smolenski played for Bulgaria U21

Pirin winger Ivan Tasev started as a starter and played 66 minutes at a good level for the youth national team of Bulgaria in the control against Hungary. Our other national player, Martin Smolenski, came on as a half-time substitute and also performed well. Tasev (the fourth in the photo from left to right) game with number 17, and Smolensky from the number, which also brings to Pirin – 18.

The match at Haladas stadium ended with a victory for the hosts from Hungary with 1:0, and the goal fell in the first minute of the match. The match was played in front of 1600 audience.

The next meeting of Bulgaria U21 is on Tuesday, 27-and September, from 18:00 no. against Serbia. The match will be played on the central field of the National Football Base "Boyana". 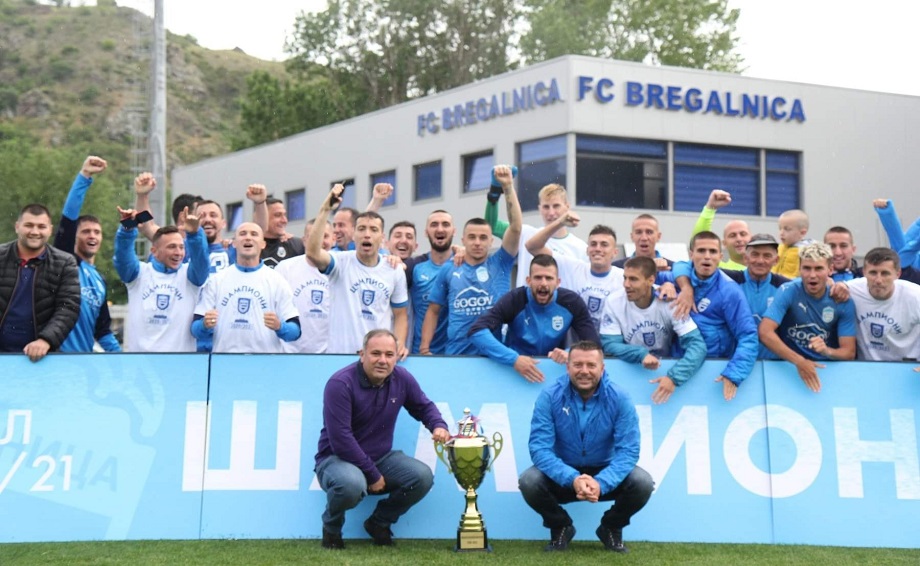 This is Bregalnitsa (A pinch)

During the break for the participation of the national teams in the Pirin League of Nations tournament, a friendly match will be played with the team from North Macedonia Bregalnica (A pinch). The match is on Saturday, 24 September, from 16:00 no. stadium “Hristo Botev”.

Bregalnica was founded in 1921 g. and plays its home matches at the city stadium in Stip, which currently has a capacity of approx 4 000 people. The team colors are blue and white.

in season 2021-22 the team returns to the football elite of North Macedonia, after becoming champion of the Second Division with 12 points ahead of the second Tikvesh.

In the last championship, Bregalnitsa finished in 7th place with 12 beat, 9 equality and 12 losses. The top scorer of the team in the last campaign with ten goals is the former player of Pirin Marian Altiparmakovski, which in season 2019-20 carries the Eagles team in one game, coming in as a reserve. Last season, the current player of Slavia Ivan Minchev played in the team from Shtip.

At the head of our upcoming rival is 50-year-old Ilcho Georgioski, who took over the team from January this year. As a coach, Georgioski is the national champion with the Vardar team (Skopje) in season 2011-12. Before that, at the head of Macedonia, Gyorce Petrov won the championship in a season 2008-09. It's an interesting fact, that through 2012 g. he was appointed president of the local football federation. That summer, the club extended Georgioski's contract until June 2025 g.

Before the start of the current season, the team from Shtip strengthened with several new additions. Montenegrin goalkeeper Nemanja Skekic, who is a former guard of the Bulgarian Montana (between 2016 and 2018) joined Bregalnica from Bosnian Rudar (Priedor). For now, he definitely wins the competition for the starting position with the youth national David Denkovski. Defender Alexander Ristevski came from Rabotnicki.
Bosnian Adis Hadjanovic, who joined the team from the Pandev Academy adapted perfectly in the midfield. Another new addition makes a good impression “blue” – winger Goran Siljanovski, who came from Dynamo (Tirana), and in 2014-15 became the champion of North Macedonia with the Rabotnicki team.

Among the successful new additions are midfielders Georgi Georgiev, who came from Borets (Veles) and former Black Sea midfielder Faysel Qasmi. It is also worth mentioning the arrival of youth international Ivan Nikolov (defensive midfielder), joined from Vardar (Skopje), but last played at Pandev Academy and that of Dimitri Dimitrievski (left wing) from Macedonia Gyorche Petrov.

Ugandan national defender Khalid Lwaliwa plays in Bregalnica. From MTK (Budapest) this summer, Colombian left-back Sebastian Herrera was brought in, who is a former Rabotnicki player. The team was strengthened with another Colombian, Alexander Cordoba, who is also an ex-player of Rabotnicki. He came from Renova. The Croatian Patrik Djalto and the Serbian Milan Jokic are also competing in the team.

After 7 played matches currently Bregalnica occupies the 5th place in the ranking with 3 beat, 2 equality and 2 losses. In the last round, the "blues" ended in a draw 0:0 when visiting FC Skopje, and the captain of the team, Daniel Moisov (former player of Vojvodina, AEK Larnaca, Liers and Bran) was sent off with a red card 20 minutes before the end. 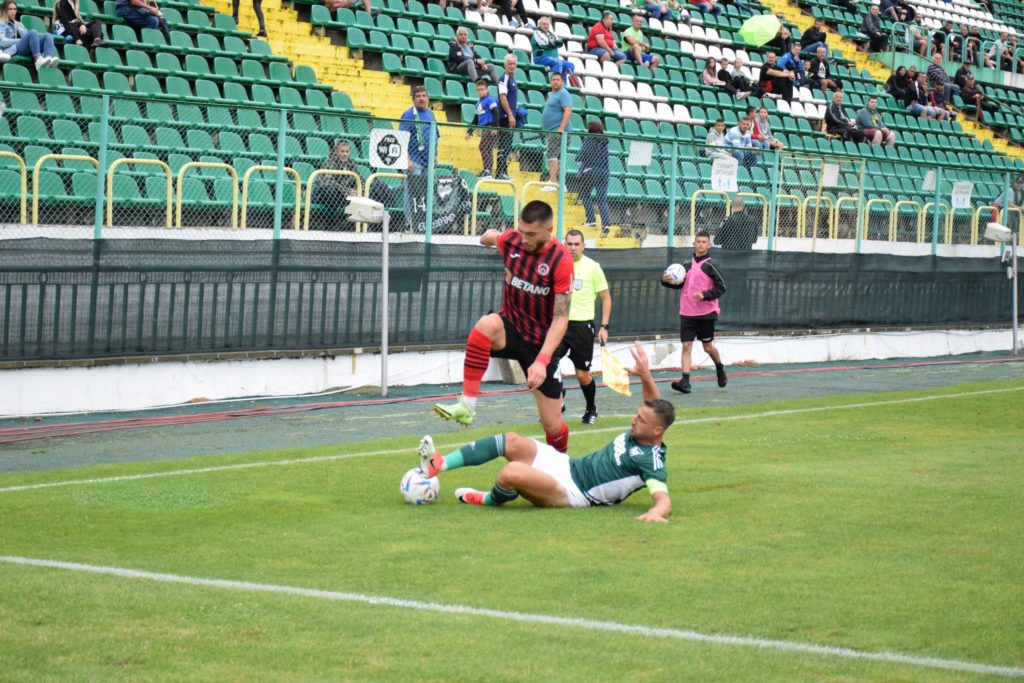 Pirin gave way to Lokomotiv (Sofia) in a match of the 11th round of the First League, which took place in a stadium “Hristo Botev” in Blagoevgrad. The only goal fell in the middle of the first part and was the work of the Brazilian Alan, after Mitkov shoots hard from a foul on the ground, and the ball kicked by Yanko Georgiev ended up right at the goalscorer's feet.

The second half started evenly, and in the 53rd minute Stanoev tried a shot from a long distance, but after a ricochet, the guard of the guests did not have any difficulty and caught it. Stanislav Kostov tried to surprise Alexander Lyubenov with a long shot in the 62nd minute, but the ball went out, and shortly after, Antonio Vutov scored from a direct free kick in the 68th minute, but the ball went wide of the left side post of Georgiev's goal.

At the end of the match, Pirin stormed to find the equalizer, but he never managed to organize anything dangerous in front of Lyubenov, except for one strong long shot, who walked past the door.
After the break for the national teams, Pirin visited CSKA-Sofia.